A blockchain,originally block chain,is a growing list of records, called blocks, that are linked using cryptography.Each block contains a cryptographic hash of the previous block, a timestamp, and transaction data (generally represented as a Merkle tree). 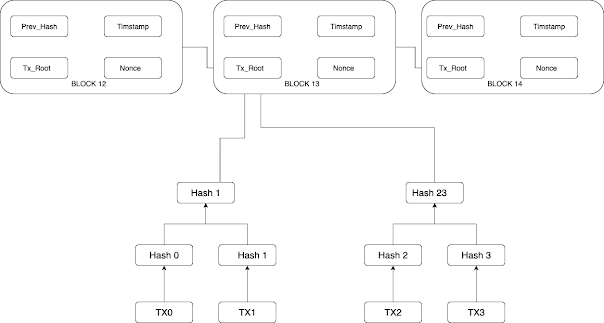 By design, a blockchain is resistant to modification of its data. This is because once recorded, the data in any given block cannot be altered retroactively without alteration of all subsequent blocks. For use as a distributed ledger, a blockchain is typically managed by a peer-to-peer network collectively adhering to a protocol for inter-node communication and validating new blocks. Although blockchain records are not unalterable, blockchains may be considered secure by design and exemplify a distributed computing system with high Byzantine fault tolerance. The blockchain has been described as "an open, distributed ledger that can record transactions between two parties efficiently and in a verifiable and permanent way".

The blockchain was invented by a person (or group of people) using the name Satoshi Nakamoto in 2008 to serve as the public transaction ledger of the cryptocurrency bitcoin.The identity of Satoshi Nakamoto remains unknown to date. The invention of the blockchain for bitcoin made it the first digital currency to solve the double-spending problem without the need of a trusted authority or central server. The bitcoin design has inspired other applications,and blockchains that are readable by the public are widely used by cryptocurrencies. The blockchain is considered a type of payment rail.Private blockchains have been proposed for business use. Computerworld called the marketing of such blockchains without a proper security model "snake oil".

Popular posts from this blog

Use the following instructions to mine a block. Open your wallet, and make sure your wallet is connected with a node. Your wallet is connected when you see the icon   in the lower right corner of your wallet. The message “Syncing Headers (0,0%)” will disappear once you mine your first block. Note: replace “examplecoin” with the name of your coin. Close your wallet and create the file dsfr.conf in the folder “%APPDATA%\dsfr”. Paste the following text into dsfr.conf and save the file. rpcuser= rpc_examplecoin rpcpassword= pifw1fqxfkdd23n59rcr63sqrfiqkw184uxb0blo rpcallowip=127.0.0.1 listen=1 server=1 addnode=node1.localserver.com Open your wallet. Create a .bat file named mine.bat in the same folder where you extracted example-cli.exe and paste the following text into mine.bat. @echo off set path_cli=%cd% cd %path_cli% echo Press [CTRL+C] to stop mining. :begin  examplecoin-cli.exe generate 1 goto begin Save the file. Execute mine.bat to start mining your first block. It will take abou
Read more

How do I restore my wallet?

Use the following instructions to restore a backup of your wallet. Note: replace “examplecoin” with the name of your coin. 1) Close your wallet. 2) Open the folder “%APPDATA%\dsfr\”. 3) Make an (extra) backup of the file “wallet.dat”. 4) Copy the file “wallet.dat” from your original backup to the folder “%APPDATA%\dsfr\”.
Read more